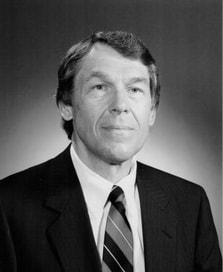 ​Barry L. Reece was born March 24, 1935 in Grundy County, IA to Elbert and Gladys Reece. He graduated from Eldora High School in 1953 and earned a certificate from the Gale Institute the same year.
Prior to his graduation from high school, Barry joined the National Guard in Iowa Falls and then spent two years working for the Chicago, Burlington, and Quincy railroad at its corporate office in Chicago. He then enlisted in the U.S. Army for a two-year tour of duty. He held the rank of Specialist Third Class at the time of his discharge from the service.
Barry returned to Iowa in 1957 and enrolled in Ellsworth.  He received his AA degree from Ellsworth Junior College in 1959, his BA in 1961 from Iowa State Teachers College in Cedar Falls, his MA in 1962 from the State College of Iowa in Cedar Falls, and his Ed.D in 1971 from the University of Nebraska. Following completion of his master’s degree in 1962, Barry accepted a faculty position in the business department at Ellsworth where he taught until accepting a faculty position in the business department at the University of Northern Iowa (previously known as the State College of Iowa). After nine years at UNI, Reece accepted a faculty position at Virginia Polytechnic Institute and State University where he retired after 22 years with Professor Emeritus status. His position combined classroom teaching and extension activities that helped businesses to grow and develop.
During his 32-year career in higher education Barry was involved in teaching, research, consulting, and designing educational programs. During his career he also served as a visiting professor at the University of Iowa, the University of Missouri, the University of Nebraska, the University of Northern Colorado, and Wayne State College and is the author or co-author of six college textbooks including Effective Human Relations, Interpersonal and Organizational Applications. The 13th edition of the textbook was published this year and his daughter, Monique, is now the co-author. He is the recipient of the Excellence in Teaching Award for classroom teaching at Virginia Tech and the Trainer of the Year Award from the Valleys of Virginia Chapter of the American Society for Training and Development for his work designing training programs and conducting workshops and seminars devoted to leadership, human relations, communications, sales, customer service, and small business operations.
Barry has been active in the peace movement for many years. He serves on the Board of the Eisenhower Veterans for Peace chapter and is an active member of Vietnam Veterans Against the War.
In 1956, he married Vera Powell at Fort Gordon in Augusta, Georgia. She passed away June 10, 2015. The couple has three daughters and a son.
Apply Now
Donate to this Endowment