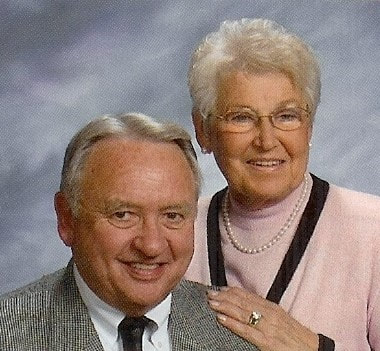 Dale Howard was born September 24, 1933 in Lewis, Iowa to Edgar and Ruth Garlo Howard. He graduated from Lewis High School in 1951 and received his BS in Physical Education in 1955 from the University of Iowa. Following college he enlisted in the U.S. Army in 1955 serving in Germany before being discharged in 1957. He then embarked on a teaching and coaching career. Howard coached boys basketball at Bridgewater from 1957-58 and then at Bridgewater-Fontanelle High School from 1958-59. He then accepted a position coaching men’s basketball at Creston Junior College from 1959-64. He then took a break from coaching and served as an admissions counselor at the American Institute of Business (AIB) in Des Moines from 1964-68. Howard returned to coaching at Iowa Central Community College in Fort Dodge from 1968-73 and then made a career change becoming general manager at C & L Motors in Fort Dodge. In 1975 he purchased the Chevrolet dealership in Iowa Falls and opened Dale Howard Chevrolet. Over the years he has also acquired the Ford and Chrysler dealerships becoming Dale Howard, Inc.
Howard has been active in the community providing guidance and leadership to many community organizations. He served as a member of the Ellsworth College Foundation Board of Directors and was a member of the Ellsworth Municipal Hospital Foundation. He was also a member of the Iowa Auto Dealers Association and belonged to the First United Methodist Church in Iowa Falls. Howard and his family have generously provided funding for the Dale Howard Family Activity Center on the ECC campus. He passed away January 30, 2015.
Marilyn (Marshall) Howard was born July 16, 1932 in Lewis, Iowa to Russell and Beulah (McGaffin) Marshall. She graduated from Lewis High School in 1950 She received an AA degree from Drake University in 1952 and then taught at the Wiota Consolidated Schools from 1952-54. She is a member of the First United Methodist Church in Iowa Falls. In her spare time she enjoys spending time with her family, reading, and athletics. She married Dale Howard June 19, 1953 at Lewis, Iowa. The couple has four children, Steven, twins Diane Gulick and Donna Embree, who both attended ECC; and Scott.
Apply Now
Donate to this Endowment