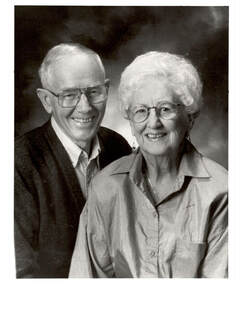 Foster and Madeline Mason made a lifetime commitment of service to their community. Foster, an Iowa Falls native, was a 1941 graduate of Ellsworth Junior College and received his B.S. from Iowa State University in 1949. Foster and Madeline were involved in farming from 1949 until 1987. In 1959, Foster was named a Master Swine Producer. He has been particularly active in support of his Ellsworth alma mater. Foster joined the Ellsworth College Board of January 1976 until he retired from the board in July of 1991. During his tenure, he lead the campaign to construct the $500,000 indoor swimming pool on the Ellsworth campus which opened in 1979. In that same year he was also the recipient of the Iowa Falls Community Service Award. He was a member of the Ellsworth Community College Centennial committee, which planned the celebration of 100 years of excellence in education in rural Iowa in 1990. Foster also co-chaired, with his longtime friend Elmer Stockdale, the successful $1.715 million capital campaign which was completed in 1991. In 1989, he was named an “Outstanding Alumnus of Ellsworth Community College.” On May 1, 1992, Foster was honored by Governor Terry Branstad at a volunteer recognition ceremony, a date which coincidentally was his birthday. He continued to serve as a member of the Ellsworth College Foundation Board until his passing. At the Ellsworth graduation ceremony in the spring of 1997, Foster was awarded an honorary Doctor of Pedagogy degree by the President of the Ellsworth College Board of Trustees, Jerry Welden. He was also a member of the Iowa Falls Lion’s Club and served on the Iowa Falls Public Library Board.
Madeline (Thomas) Mason, a Norway, Iowa native, has also been a most committed member of their family. She was an original member of the Iowa Falls Day Care Board and the Iowa Falls Housing Corporation. She has been an active member of the Union Cemetery Trustees. Madeline provided countless hours reconstructing accurate records of those interred there. Foster and others helped restore many headstones in that cemetery. Madeline died in 2018.
In 1986, the couple established an endowed academic scholarship at Ellsworth in their names to benefit deserving students in furthering their education.
Foster and Madeline were both avid cyclists and Foster participated in several RAGBRAI events. During the winter months, the Masons lived at their winter home in Tucson, Arizona. They are the parents of three children: James, Mary, and Nancy of Blacksburg, Virginia.
Foster died following a truck-bicycle accident in Tucson on March 14, 2001 at the age of 78. His counsel and friendship will be missed by all who were fortunate enough to know him. A plaque honoring the contribution Foster and his friend, Elmer Stockdale made to Ellsworth is on the east wall in the lobby of Kruse-Main on the Ellsworth campus.