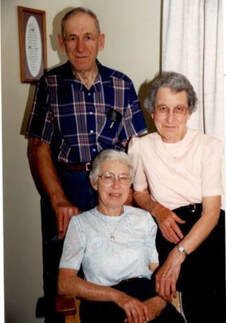 Elmer, Esther and Wilma Meyer are Franklin County, Iowa natives born three miles north of Alden to Richard and Emma Meyer. The family moved to a farm northeast of Iowa Falls on March 1, 1929.
Elmer Raymond Meyer was born May 18, 1920 and attended Beaver Valley Country School. He entered the U.S. Army in September 1942. Following his military service Elmer returned home and farmed with his father until 1960. The farm operation included a dairy herd and the sale of Grade A milk until the cows were sold in 1985. Elmer retired from farming in 1997. He passed away February 17, 2011.
Esther Lucile Meyer was born September 22, 1922 and attended Beaver Valley Country School. She did housework and was employed at the nearby Junction Truck Stop as a cook and a pie maker. Following that she
worked at the Farmland Foods Packing Plant for 19 years retiring in 1985.
Wilma Marie Meyer was born September 11, 1927 and also attended Beaver Valley Country School and the Hampton, Iowa High School, graduating in 1944. She helped at home doing housework, gardening, raising chickens and laying hens, and participated in all phases of the family farm operation for 53 years.
Esther and Wilma continue to be active in St. John’s United Church of Christ and St. John’s Willing Workers in Ackley, Iowa. In 1997 the Iowa Falls community embarked on a $2.4 million Vision 21 Fund Drive. The purpose being to construct an aquatic center, a new library and to restore the Carnegie-Ellsworth Library building. The Meyer family provided financial leadership for this successful project and the Meyer Aquatic Center dedicated on July 1, 2000 is named in their honor. This aquatic center is recognized as one of the finest in the state of Iowa and the entire area is most grateful for their financial support. The Rock Run Playground was also the beneficiary of their support.
The Meyer’s also have been most generous to Ellsworth Community College with funds, which annually provide scholarships to students who need help to further their education. In appreciation of their support of the college, the Meyer’s were honored as parade marshals of the 2002 ECC Homecoming parade.
The generosity of this family is appreciated so much by the members of this community. The Meyer name will be remembered into perpetuity
Apply Now
Donate To This Endowment