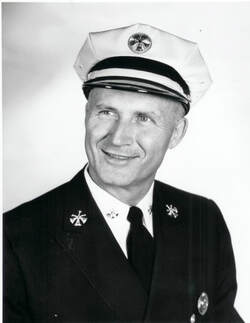 William F. Strube began his career as a fire fighter in Philadelphia in 1940. He then spent 12 weeks of intensive training in all facets of fire fighting and graduated second in his class of 59 rookies. Upon graduation he was transferred to a rescue squad. In 1946 he was promoted to lieutenant and assigned to a new rescue squad. He had the responsibility of training and organizing the new company and built into a top-flight unit. His work with the unit led to another promotion in 1950 when he was transferred to the Philadelphia Fire Training College in Roxborough to serve as an instructor. He taught there until 1952 when another interesting phase of his career began.
A new administration had taken over and one of its new ideas was the creation of a bi-weekly TV show featuring the fire department. Strube applied. Upon his successful audition, he was transferred to the Office of Deputy Fire Commissioner for Fire Prevention and assigned to make the show “Public Servents No. 1” a reality. Strube really enjoyed his work as producer, script writer and program emcee. The show which ran for two years covered all aspects of fire fighting, fire prevention, training and related subjects. His success with the TV show led to him being assigned to edit a fire department newspaper PFD News. He was then promoted to Administrative Assistant to the Deputy Fire Commissioner, where he picked up valuable public relations experience. In 1952, Strube placed first on the captain’s examination and was promoted. The following year Strube’s use of media to promote fire prevention led to the department receiving first place for best fire prevention program and best year-round program from the National Fire Protection Association. Following a return to active-duty fire fighting, Strube was promoted to Battalion Chief in 1957. In 1961, Strube was made director of the Philadelphia Fire Training College where he was responsible for all department training. He continued in that position until 1964 when he returned to active duty spending his final year with the department.
Upon his retirement in 1965, Strube accepted a position as assistant safety director with Allied Chemical Corporation. Through his efforts the company’s poor safety record was turned completely around and his efforts led to a promotion to safety director in 1967. He was eventually promoted to director of safety education and training where he worked on the company’s video safety training program. The videos were eventually sold to other companies for use with their employees. Strube retired from Allied in 1980, but continued to do consulting work until his wife, Elsie’s stroke in 1982. For the following 14 years until her death in 1996, Strube devoted himself to her care.
Strube served for many years as a Boy Scoutmaster and one of the Scouts he oversaw was ECC’s Criminal Justice and Fire Science Instructor Bernie Koehrsen who established this scholarship in his honor. ​
Apply Now
Donate to this Endowment