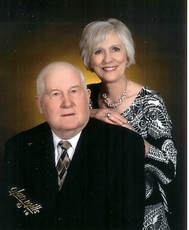 John Dolan was born May 4, 1937 in Casey, Iowa to Martin and Grace Dolan. He graduated from Casey High School in 1955. Dolan received his BA in 1959 and his MBA in 1963 from the University of Northern Iowa, did post-graduate work at the University of Minnesota and received his CPA from Drake University in 1975. He enlisted in the U.S. Army in 1960 and served six months on active duty and five-and-a-half years in the reserves. He was discharged in 1966. During this period he also embarked on a teaching and coaching career. Dolan taught and coached at Ventura High School from 1959-62 and then accepted a position teaching business and serving as an assistant football and baseball coach at Ellsworth Community College from 1963-74. During that time ECC’s football squad enjoyed much success and won two trips to the Sterling Silver Bowl in Sterling, Kansas and a third-place finish at the NJCAA Baseball Tournament in 1965. In 1974 Dolan made a career change and became general manager and chief financial officer of Iowa Veterinary Supply (IVESCO) in Iowa Falls where he served until his retirement in 1999.
He has and continues to serve the community in many ways. He is a member of St. Mark’s Catholic Church in Iowa Falls and is a member of the Knights of Columbus. He has served on the Ellsworth College Board of Trustees since 1976 and is a member of the Iowa Falls Rotary Club. He previously served as a member and president of the Iowa Falls Chamber of Commerce Board and as a member of the Ellsworth Municipal Hospital Board of Directors from 1978-83. Dolan was also honored with the Iowa Falls Community Service Award in 1984 and was named to the Ellsworth Athletic Hall of Fame in 2000. In his spare time he enjoys sports, hunting and travel.
Dalene J. (Whetstone) Dolan was born July 5, 1940 in Casey, Iowa to Ted and Lavere Whetstone. She graduated from Adair-Casey High School in 1958. received her BA in 1964 and her MA in 1973 from the University of Northern Iowa. She then served as an elementary teacher and a reading teacher. Over the years she has been very active in the community volunteering her time and talents. She is a member of St. Mark’s Catholic Church in Iowa Falls. She coordinated the ECC Home Away From Home program for 11 years and currently serves as a docent for the Pat Clark Art Collection as well as being active in many civic organizations and political activities. In her spare time she enjoys gardening, golfing, reading, and spending time with friends.
The Dolans were married on December 31, 1960 and have three children: Jacqueline, Patrick, and Regina who all attended ECC. The couple also has six grandchildren: Meghan, Shannon, Caitlin, Anya, Jack, and Kate.
Apply Now
Donate to this Endowment