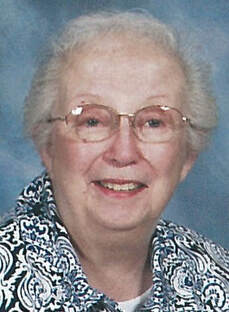 Mary Catherine Weeks was born on September 25, 1925 in Hampton, IA. to Dr. U.W. and Mary Elizabeth (O’Connor) Weeks. She graduated from Hampton High School in 1943 and earned her BA at the Iowa State Teachers College (University of Northern Iowa) in 1946. From 1946 to 1950 she taught social science and English classes at the junior high school and high school level. In 1950 she began pursuing a master’s degree in library science from the University of Wisconsin, Madison. From 1950-51 she served as an intern at the Mason City Public Library and the following year completed her MA. She then served for one year as an elementary school librarian in Long Beach, CA. In 1953 Weeks took a reference library position at Kansas State University in Manhattan, KS where she served until 1956 when she accepted a position with the Iowa Falls Community School District. At this time the school district was administering Ellsworth Junior College and Weeks spent the next 12 years working in the public school libraries as well as Ellsworth’s. She worked in all of the school buildings with only one assistant at West Elementary which is now known as Pineview Elementary. Weeks was one of only two female faculty when she joined the Ellsworth staff, and credits Prof. Loudine Hill as being a valuable mentor to her. After the administration of Ellsworth was transferred to the Iowa Valley Community College District in 1968, Weeks continued to serve the college as library director until her retirement in 1987.
Weeks is a member of St. Mark Catholic Parish in Iowa Falls where she has served as parish council president and chaired several committees including the social justice committee and was instrumental in starting the parishes’ Lenten social justice meals. She served a member of the Ellsworth College Foundation Board from 2001-2013 and is also a member of Delta Kappa Gamma (the honorary society of women educatiors) and the Retired School Personnel. In her spare time she enjoys playing Bridge, reading, and travel memories.  ​
Apply Now
Donate To This Endowment