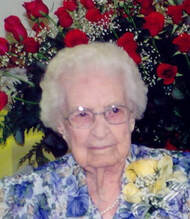 Edna Marie Boddy was born August 23, 1900 in a log cabin in Benton County to Jesse and Mary (Primmer) Evens. She attended country school and graduated from Shellsburg Community High School in 1919. Edna then attended Iowa State Teacher’s College in Cedar Falls and taught country school at Delhi and Blairsburg. On October 6, 1934, she married Ray Boddy in Shellsburg, Iowa. Ray passed away October 12, 1965. Edna was a member of the First United Methodist Church, the Women’s Society, the Methodist Quilters, the Home Ec Club, and several other social groups. She was a long-time supporter of Ellsworth Community College and contributed to the Second Century Challenge, the remodeling of Hamilton Auditorium, and to the Calkins Nature Area. Her generosity also extended to many other charitable organizations. Edna passed away April 16, 2004. The Ellsworth College Foundation was the recipient of a very generous estate gift from Edna and at its meeting of May 19, 2004 established an endowed scholarship in her honor.
Apply Now
Donate To This Endowment