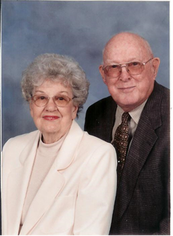 ​Bill and Judy Harris were active members and leaders in the Iowa Falls community. Bill was born on January 16, 1921 in Iowa City. His parents were Stephen and Bertha Harris of Iowa Falls. Judy was born March 5, 1921 in Des Moines to Almon and Florence Drury of Dows. She attended high school there and graduated in 1939.
Following his graduation from Iowa Falls High School in 1939, Bill attended Ellsworth Junior College and Iowa State College. He then journeyed to California and worked for Lockheed Aircraft. The couple was united in marriage in Hollywood, California on November 24, 1941. They then returned to Iowa Falls to participate in the Harris family farming operation. In December 1944, Bill entered the United States Army serving in the southwest Pacific.
Following the end of World War II, he was discharged in August of 1946 and returned home to resume farming.
Bill and Judy were the parents of three children, Son Craig and his wife, Kristi, live in Iowa Falls where he owned and managed the Harris-Potter Insurance Agency. Daughter Anne Voge, a retired high school Spanish teacher, and her husband, Pat, who is engaged in farming, also live in Iowa Falls. Son Stephen was killed in an automobile accident.
In 1956, Bill left the farm and entered the farm real estate and insurance business in Iowa Falls, which he operated successfully until his retirement in 1985. Bill’s legacy was always one of honesty and integrity in all of his business and personal transactions. He was active in service to his community as a member of the Iowa Falls Community School District Board of Education and the Ellsworth College Board of Trustees of which he was a member for 19 years, retiring in August of 1986. In addition to Bill’s service on the Ellsworth College Board of Trustees, the Harris’ continued to be supportive of Ellsworth through several generous gifts to the college and through their attendance and membership in the “E” Club. Of particular interest is that their home of 22 years was built by the Ellsworth Carpentry students as a speculative house of the Iowa Valley Community College District which Bill and Judy purchased immediately following its construction. Bill’s many interests included athletics, particularly Iowa Falls High School and Ellsworth as well as collegiate wrestling and annual attendance at the Drake Relays. Jazz music, card games with friends and progressive farming methods featuring conservation continued to hold his interest. Bill passed away January 24, 2007 and Judy on April 16, 2012.
This scholarship has been made possible through two gift sources. The Ellsworth College Trustees established an endowment in honor of the many years of service and support of the college through the Ellsworth College Foundation. The family of Bill and Judy Harris also created an endowment with the Hardin County Community Endowment Foundation. Funds from both sources are combined annually to provide this scholarship to students attending Ellsworth.
Apply Now
Donate To This Endowment