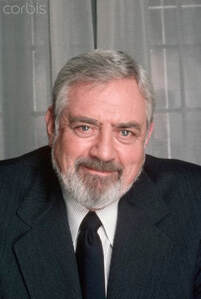 ​The Raymond Burr Scholarship is awarded annually to a student attending Ellsworth Community College who is interested in the fine arts.
Raymond Burr, a star of television and motion pictures, was born on May 21, 1917 in New Westminster, British Columbia, Canada. He lived in China for a short time then returned to Canada. He later moved to California where he eventually embarked on a distinguished acting career which spanned several decades and brought him worldwide acclaim. He starred in a number of motion pictures beginning in 1948, including the Alfred Hitchcock classic “Rear Window,” and the cult classic “Godzilla.” He is best remembered, though, for his initial television series, “Perry Mason,” in which he portrayed a defense lawyer created by Earle Stanley Gardener in a series of mystery novels. The series ran from 1957-65. He reprised the role in a series of popular television movies from 1985-93. He is also well remembered for his role in the television series “Ironside,” which ran from 1967-74. In the series he portrayed Robert Ironside, a San Francisco chief of detectives paralyzed from the waist down by a sniper’s bullet. In addition to his work on the “Perry Mason” movies, he also hosted a syndicated television series called “Trial By Jury.”
Mr. Burr served as master of ceremonies for the Ellsworth centennial celebration on September 30, 1990. He came to this event as the result of an invitation by Franklin McCord of Iowa Falls, chairman of the Centennial Committee. Mr. McCord served in the United States Foreign Service and was stationed in Fiji from 1968-70, where he became friends with Raymond Burr.
Two years after Mr. Burr’s visit to Ellsworth he was interviewed in Des Moines on a national network and made reference to his familiarity with Iowa, Iowa Falls and his friends at Ellsworth Community College.
Mr. Burr had planned to participate in the formal dedication of the Gentle Student Center in September 1993, a plan that could not be carried out due to his death from cancer that same month. Following his death, the Ellsworth College Board of Trustees provided funds to perpetuate his memory by establishing a scholarship in his name.
Apply Now
Donate to this Endowment