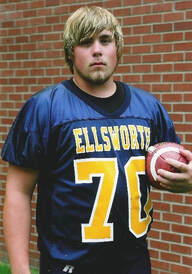 Jesse A. Jorgensen was born January 20, 1989 in Forest City, Iowa, the son of John and Mary (Johnson) Jorgensen. He was the first baby of the New Year and the last scheduled birth at Forest City Community Hospital. He was baptized in Fallon, Montana by his grandfather the Rev. Lowell B. Johnson. Jesse was raised and confirmed at Our Saviors Lutheran Church in Leland, Iowa.
Jesse attended the Forest City Schools, graduating with the class of 2007. Jesse participated in many activities during his school years including park and rec activities, high school bowling league, track, baseball, basketball, and most importantly football. Jesse was voted to the 2006 All District Team as defensive tackle. Jesse was really looking forward to playing football at Ellsworth Community College in Iowa Falls.
Jesse also enjoyed the challenge of band in which he played the tuba, contributing to Division I ratings in high school, and being a participant in many honor bands during middle school.
Jesse died Wednesday, August 22, 2007 at Iowa Methodist Medical Center in Des Moines, Iowa after sustaining a head injury. He had been attending the football camp at Ellsworth Community College.  Jesse was able to help more than 80 other individuals when he passed away because of his choice and his family’s support to participate in organ donation. His family has continued to be advocates and ambassadors of organ donation, even participating in the organ donation float in the 2015 Rose Bowl Parade.
Jesse’s scholarship was begun with gifts from faculty, staff and the football program at the time of his death, but did not reach endowment until Ellsworth College Trustee, Jerry Welden, came forward in 2015 with a gift to endow the scholarship.  He gave in Jesse’s memory and in honor of the spirit of his son Todd Welden who had passed from cancer in 2013.  Jerry knew the sadness of losing a son and wanted to honor Todd’s spirit of helping those he didn’t know and who also had been a kidney donor for a stranger while he was living.
Letters of appreciation will be forwarded to the Jorgensen and Welden Families by the Foundation. ​
Apply Now
Donate To This Endowment