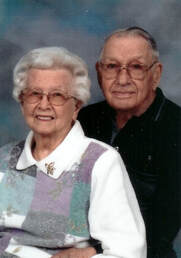 William Harold Meyer was born September 5, 1914 in Franklin County, Iowa to Frederick and Clara (Christman) Meyer. He attended country school in Franklin County and graduated from Iowa Falls High School in 1933. Dorothy Avonelle (Collins) Meyer was born February 6, 1917 in Iowa Falls, Iowa to Floyd and Elizabeth (Scheel) Collins. She graduated from Iowa Falls High School in 1934 and from Ellsworth Junior College in 1936. William and Dorothy were united in marriage on September 20, 1938 at the First Christian Church in Iowa Falls. The couple farmed in Franklin County until 1978 when they retired to Iowa Falls. Dorothy also taught school at a country school in Pleasant Valley, District 7 during this time.
William and Dorothy were both members of the First Christian Church in Iowa Falls where William served as an elder and Dorothy was a member and held offices in the Christian Women’s Fellowship. She was also a member of Mother’s Club. Both were members of the Senior Citizens Center and the Senior Bowling League, where William bowled in many tournaments. William was also a member of Meadow Hills Golf Club. He also enjoyed woodworking as a hobby.
The couple has two sons, Roger and James, and one daughter, Betty Gerdalen, 11 grandsons, two granddaughters, 29 great-grandchildren and five great-great grandchildren.
William passed away December 12, 2010 and Dorothy died on November 9, 2010. Both had been residing at Scenic Manor Nursing Home in Iowa Falls. William and Dorothy provided gifts through their estate to which their children added so a scholarship could be endowed to support a student studying in agriculture.
Apply Now
Donate to this Endowment