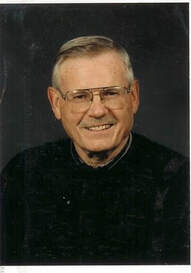 William R Welchko was born January 21, 1930 in Iowa Falls to William and Gladys Snyder Welchko. He attended Ellsworth College from 1949-50. On January 21, 1951, he enlisted in the U.S. Air Force and served as a staff sergeant during the Korean Conflict. He was honorably discharged on December 9, 1953. Welchko later attended the University of Iowa and earned his bachelor’s degree in 1956.
Welchko settled in Des Moines where he made his home for 55 years. He worked as a senior communications analyst at Principal Financial for 35 years prior to his retirement in 1992. He was a member of the First Christian Church and L.O.M.A. (Life Office Management Association). Welchko was an avid Iowa Hawkeye football and basketball fan, enjoyed traveling with Principal retirees and took great pride in his roses.
Welchko passed away May 6, 2005 and a generous gift from his estate established an endowment which will generate scholarship awards totaling $3,500 per year for future ECC students into perpetuity. His family includes his four sisters, Evelyn Hartema and Marian Newton; and Kathryn Herteen and Shirley Shepherd.