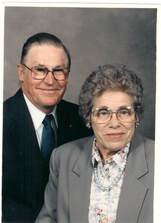 ​Meade Canfield Bartlett was born August 16, 1920 at Perry, Iowa to frank Norris and Ellen Sabina (Rowley) Bartlett. He graduated from Perry High School in 1938 and worked for Boeing Aircraft while attending Glendale Community College in Los Angeles, California. From 1942-46 he served as an U.S. Navy aviation metal smith in the Philippine Islands during World War II. Following the war, Bartlett attended Ellsworth Junior College and graduated from the University of Iowa in 1949 with a BA in Business Administration. He married Phyllis Arleta Davenport on June 3, 1950 at the First Christian Church in Iowa City. He worked for International Harvester in administration and sales at Davenport and Sigourney, Iowa before entering farming near Iowa Falls in 1954. He retired from farming in 1985. He was a member of the First Christian Church in Iowa Falls, the Iowa Falls Kiwanis Club and the Hyman-Peavey American Legion Post #188 of Iowa Falls. He passed away January 14, 1999.
Phyllis A. (Davenport) Bartlett was born July 28, 1924 at Bradgate, Iowa to Fay Tecumseh and Marjorie Melona (Goodell) Davenport. She graduated from Rutland (Iowa) High School in 1940. She also graduated from the Iowa Methodist Nursing School in Des Moines and attended the State University of Iowa for two years. She worked at the Pediatric Polio Wards and the University Hospitals in Iowa City and also did community health nursing for Scott County in Davenport. She was a member of the First Christian Church in Iowa Falls where she served as a deaconess and a member of the Christian Women’s Fellowship. She was also a member of the Parchment Club. She passed away March 4, 2005
The Bartlett’s are survived by one son: Peter and his wife, Kathy, of Iowa Falls; two daughters, Anne Krepps and her husband, Bob, of Cape Coral, Florida; and Liz Posey and her husband, Lyle, of Ottawa, Kansas; and eight grandchildren.
Apply Now
Donate To This Endowment