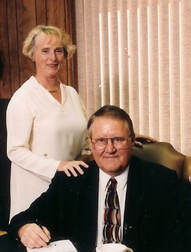 ​Tom & LaVonne Kruse have been longtime supporters of Iowa Falls and Ellsworth Community College. They have provided personal leadership and generous financial support both privately and through their very successful corporation Iowa Veterinary Supply Company (IVESCO).

Tom was born, November 17, 1930 in Abbott, Iowa to Thomas and Kate Kruse. He graduated from Steamboat Rock High School in 1949 and graduated from Ellsworth Community College in 1951. Ironically, Tom enrolled at ECC on the day Old Main burned down. That building was eventually replaced by the structure that now bears the family name.

In 1953, Tom went to work for the Iowa Veterinary Supply Company and in 1966, he and Kenneth Madole purchased the company from Harley Rummel. Madole retired in 1984 and Tom became majority stockholder on July 26, 1955. Tom and LaVonne Harrenstein were united in marriage the same year. They became the parents of three children, daughters Suzanne and Lisa, and son, Thomas J. Kruse. Tom served on the Iowa Falls Chamber of Commerce and Iowa Falls Area Development Corporation boards of directors and as a member of the Iowa Falls Ambassadors, the Iowa Falls Elks Club and the Ellsworth “E” Club. He was also involved in the Scenic City Civic Foundation and provided contributions and leadership locally to many Iowa Falls community projects and nationally through Campus Crusade for Christ. Tom passed away March 31, 2006.

LaVonne was born May 28, 1933 in Wellsburg to Alice Harrenstein. She graduated from Wellsburg High School in 1951, attended the Iowa State Teachers College from 1951-52 and graduated from Ellsworth Community College in 1954. LaVonne served on the Ellsworth College Board of Trustees from 1974-87. During that time she was the catalyst for the $500,000 fund drive which resulted in construction of the ECC Indoor Swimming pool which opened in 1979. LaVonne passed away April 21, 2018.

Suzanne Kruse was born June 28, 1959. She graduated from Iowa Falls High School and received a Bachelors degree from the University of Iowa and a Bachelors of Christian Psychology from Carolina Christian College. On March 20, 1982, Suzanne married Dan Stephens. To this union were born two daughters, Crissa of Washington, D.C. and Cady of Marion, Indiana; and a son, Nikolas at home in Cedar Falls.

Most regrettably, Suzanne passed away on January 12, 2006. She will be remembered as a strong and vibrant person with a compassion for serving the Lord and those around her. She was a loving and committed wife and mother of children that love the Lord and was “Mom” to many more in her life. She had a tremendous passion for serving others through activities such as the Christmas and Easter productions at Cedar Valley Community Church, youth group, Alternatives Pregnancy Center and demonstrating incredible compassion for individuals in need.

Lisa Kruse was born August 18, 1971 in Iowa Falls. She graduated from Iowa Falls High School and attended the University of Northern Iowa in Cedar Falls where she received her Bachelors degree. She also received a MA degree in Christian Counseling from the University of Mars Hills in Seattle, Washington. She now resides in Dallas, Texas.

Thomas J. Kruse was born October 5, 1961. He graduated from Iowa Falls High School and attended Simpson College in Indianola, Iowa where he received a bachelor’s degree in Political Science. He previously served as the president and CEO of IVESCO (Iowa Veterinary Supply Company) before its sale. T.J. perpetuates the family tradition of sharing the family and company resources with the local, state and national community. T. J. has one son, Jackson, of Omaha, Nebraska. T.J. passed away November 24, 2018.

The Kruse Family has been most generous to this community and the college with both their time and financial support and that legacy continues. In recognition of their generous support of the college, New Main was renamed Kruse-Main Hall in 1996.

​Ellsworth Community College and the Iowa Falls community have been well served by the Kruse family. That service was most recently evidenced by the establishment of this most generous Kruse Family Endowed Scholarship.
Apply Now
Donate To This Enrollment