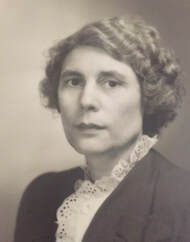 Helen Carlyle (McLeod) Fiske was born March 3, 1894 in Mingo, Iowa to Arthur & Elizabeth (Johnson) McLeod. She attended schools in Mingo, Iowa and Clarion, Iowa. Her parents and several siblings settled in Iowa Falls.  She graduated from Ellsworth College in 1916. Following graduation, she taught school in Burdette and later moved to Minneapolis, Minnesota where she served as a reporter for the Minneapolis Star newspaper. Following that she was advertising manager for the Young Quinlin Company.
She married Douglas A. Fiske in 1925 and the couple had one son, Douglas, Jr. in 1926. After her husband’s death in 1928, she and Douglas, Jr. moved back to Iowa Falls to be closer to her family.  Helen served as a reporter and eventually as editor for the Iowa Falls Citizen newspaper during World War II. She also continued to write plays and short stories throughout her life. She served as a member of the Iowa Falls School Board and the Isabella Literary Society. In her spare time, in addition to writing, she enjoyed growing trees, flowers, and gardens on her farm in the norther part of Iowa Falls. She passed away at home on December 12, 1983.
Helen’s son, Doug endowed this scholarship in his mother’s honor.  The award is given to students in the English department who excel at and enjoy writing, literature and journalism and is selected based on merit by the faculty in the English Department at Ellsworth.
Apply Now
Donate to this Endowment