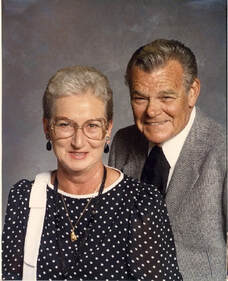 The John and Marilyn Hofmann McNemar Endowed Scholarship was established in December of 1999 by Marilyn (Hofmann) McNemar. Mrs. McNemar graduated from Iowa Falls High School and attended Ellsworth Junior College from 1946 until her graduation with an associate’s degree in 1948.
Mr. McNemar was a hard-working, hard-playing Irishman, highly respected by all. His next dedication was to the U.S. Marine Corps in which he served in World War II. He was involved in the invasions of Saipan, Tinian, and Tarawa as a flame-thrower, one of only a few survivors of his original unit who knew him as being scrupulously honest and fair.
His first interest in life was football, which he played in high school, college and professionally with the Los Angeles Bulldogs in the late 1930s.
His working career was in general construction. He learned all the trades along the way and earned his degree in architectural engineering. He and two others opened their own construction firm in the Los Angeles area in the 1950s and did considerable amounts of work for the government, schools and large commercial projects.
He later worked for other construction firms in California and in 1970 was offered a job with a company in Fairbanks, Alaska. Two years later, recognizing the potentials in Alaska, and with the support of others, McLee Construction Company was formed. It received contracts for large amounts of work on the Alaskan pipeline, as well as other governmental and commercial jobs.
Marilyn spent her working years primarily in the insurance industry in Los Angeles until moving to Fairbanks, Alaska, where she became a member of the Business and Professional Women’s Club, the USO, and the Fairbanks Chamber of Commerce. She also helped found a free breast cancer detection center and worked part-time at McLee’s Construction office.
John and Marilyn retired to Hawaii in 1979, but then returned to California in 1982. John enjoyed a few good years before losing his eyesight and finally succumbing to a pulmonary embolism on August 20, 1990. Marilyn relocated to her hometown of Iowa Falls in January of 2004.
John McNemar loved life to the fullest. He was a good golfer, excellent bridge player, enjoyed cooking, entertaining and music. He had a wonderful sense of humor. If recipients of this scholarship can somehow acquire any of his qualities and share them with their contemporaries, the world will be just a bit more kind, caring, fun and wonderful.
Apply Now
Donate To This Endowment