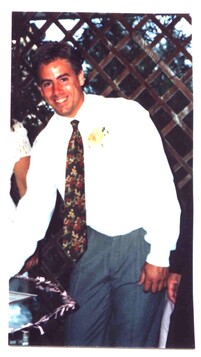 ​Robert Ellingson was born February 9, 1965 in Iowa Falls to Eddie and Margaret Ellingson. He attended the Iowa Falls Schools and graduated from Iowa Falls High School in 1983. He graduated from Ellsworth Community College in 1985 and completed his BA in Education at Arizona State University in Tempe, Arizona.

Robert had a life-long love of sports. He was a member of the basketball, baseball, cross-country and golf teams in high school, and played baseball and golf while attending Ellsworth. He was actively involved in coaching, officiating athletics, summer camp counseling and substitute teaching at Phoenix Country Day School in Arizona. He especially enjoyed working alongside his older brother, Brian, who also taught at the school. Bob Kosower, the school athletic director, said that Robert “loved working with young people. He led his teams by example, and they were always well coached and well disciplined.”

Robert lost his life in a jet-ski accident at Lake Powell, Utah on September 10, 1997. At that time, he was employed as an investment counselor for the National Association for Secured Investments.

​A memorial scholarship fund was established that year by the Ellsworth College Foundation and was fully endowed in 2002. The scholarship is awarded to an Iowa Falls High School graduate who was a member of the baseball or golf team. If no IFHS graduate meets the criteria the scholarship may be awarded to a student outside the district.

Robert’s family has a strong connection with ECC. Every member of his family graduated from the college with Associate degrees, Eddie and Margaret in 1949, his two older sisters, Debbie and Lori in 1975 and 1977 and his two older brothers, Brian and Todd in 1979 and 1982. The college is very appreciative of the Ellingson family’s long-time support.

Roberts family and friends will remember him for his bright, positive sense of humor, and his love of life. They hope that the recipient of this award will live their life with as much zest and enthusiasm as Robert.
Apply Now
Donate To This Endowment