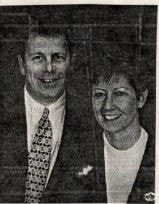 ​Eric and Janet Emery established this endowed scholarship on September 18, 2001. The motivation for their gift was that “teachers and mentors have been very important in our lives,” with parents of the couple being involved in education. Janet and Eric further state:
“We have been blessed with mentors who have encouraged us, challenged us, by giving us more than we thought we could handle, and have shown patience when youth and inexperience got in the way. Most importantly, we were taught nothing replaces honesty, hard work and professionalism.”
Eric graduated from Gilmore City-Bradgate High School in 1977 and then enrolled at Ellsworth Community College, graduating with an associate of arts degree in 1979. He was elected student body president in 1978-1979. He then transferred to the University of Northern Iowa, graduating in 1981 with a B.A. degree in public relations.
Janet graduated from Waukon High School in 1979, where she was a member of the National Honor Society and Quill & Scroll and was named as a State of Iowa Scholar. Janet then enrolled at the University of Northern Iowa, graduating in 1982 with a B.S. degree in accounting. Eric and Janet were married on July 7, 1984 at St. Patrick’s Church in Waukon.
They couple states that, “Ellsworth and the University of Northern Iowa allowed us to search, experiment and develop as young people while preparing for our future.”
They moved to California in 1983 and worked in a variety of business management and accounting positions. In 1998, they formed the Lighthouse Management Group, a business consulting firm in Sierra Madre, California. In 1999, they purchased the assets of Bennett Bowen Company, a distributor of safety products. The company is now known as Bennett Bowen Lighthouse.
Their activities include support of the Cystic Fibrosis Foundation, American Diabetes Foundation, City of Hope cancer research, St. Rita’s Catholic Church, theatre, and membership in the Via Verde Country Club.
Apply Now
Donate to this Endowment