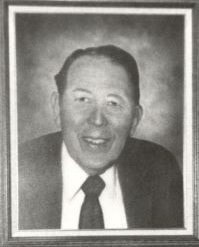 Reginald “Reg” Johnson was born in Chicago in 1907 and moved to Iowa Falls when he was five years old. He graduated from Iowa Falls High School and attended Ellsworth College in 1927. While attending Ellsworth, he was center on the football team and played basketball, both with distinction. He later attended Waldorf College, from which he graduated. He then attended Upper Iowa University where he again played football. Reg married Clara Underdahl Johnson in 1927. The couple then moved to Glendale, California, where he established the W. R. Johnson Investment and Loan Company and was involved in the horse racing industry. Clara died in 1983. Reg was a strong supporter of his church and was active in several civic organizations in addition to his business interests. He was a lifetime member of the Elks and a member and past president of the Lutheran Business Men’s Club and a superior bridge player.
Reg was a generous contributor to the Iowa Falls Community Chest and especially Ellsworth Community College. He established the first permanently endowed scholarship at Ellsworth. Reg served as grand marshal of the 1984 Homecoming Parade. On Valentines Day, February 14, 1993, he married Ruth Failing.
​
In June 1990, the Ellsworth College Board of Trustees, Foundation Board and the Iowa Valley Community College District Board of Directors voted to name the new classroom facility at Ellsworth, Reg Johnson Hall, in honor of his continuous support of the college. That support included the largest donation to Ellsworth’s Second Century Challenge Capital Campaign, which helped insure the college’s continued service to rural Iowa. The following inscription, submitted by his family, is displayed below a portrait of Reg in Reg Johnson Hall:

A man of strong Christian convictions,
an athlete who enjoyed competitive games,
and also games of chance.
A very successful Horseman,
Known as the “King of the Claimers.”
His generosity to others was exceeded
​only by his love for his family.

Reg and Clara had one son, Don (deceased), daughter-in-law, Diane and two granddaughters Laurie Rumore and Holly Donaldson and one great-granddaughter April Rumore. Reg passed away August 3, 1995.
Apply Now
Donate to this Endowment