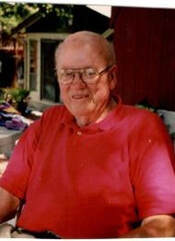 Max Johnson was born on September 3, 1920 the son of Earl and Martha Johnson of Williams, Iowa. Max graduated from Williams High School in 1940 and then attended Ellsworth Community College where he enrolled in the flight program, graduating in 1941.
Max then enlisted in the United States Army Air Corps and attended navigation school in San Marco, Texas, graduating as a second lieutenant in 1943.
He served in the European Theatre, flying 35 missions from Thorpe-Abbotts Field near Ipswich, England, from March through July 1944 in a B-17, “The Flying Fortress”, mostly over Germany. On D-Day, (date of European invasion), Max’s notebook says, “Mission #24, Tuesday, June 6, 1944, Falaise: Supporting invasion. Saw hundreds of invasion ships
and gliders going to France on our return. 7 hours.” His military awards include the Distinguished Flying Cross and the Air Medal. He was separated from the service in January of 1946.
Following discharge from the Air Corps, Max attended the State University of Iowa and Iowa State University. On September 17, 1949, Max and Virginia Graham of Iowa Falls were united in marriage.
Max served as the president of the Iowa Falls Savings and Loan for 32 years, but found time to serve Ellsworth Community College as an original member of the Ellsworth College Foundation, Foundation Board member and long-time treasurer of the “E” Club. In recognition of this support, Max was inducted into the Ellsworth Community College Athletic Hall of Fame on October 11, 1997.
On March 21, 2001, the Ellsworth College Foundation Board established this endowed scholarship in Max’s honor in appreciation of his longtime service to Ellsworth Community College, as well as his service to his community and country. Others would do well to emulate this commitment to serve. He will long be remembered for his dry wit. Max died on January 14, 2002 and Ginny passed away on February 21, 2004.
Max and Ginny have four children: Tom Johnson, Bruce Johnson and Sarah Hardy, and Teresa Spurlock. All of whom graduated from Ellsworth with A.A. degrees. ​
Apply Now
Donate To This Endowment