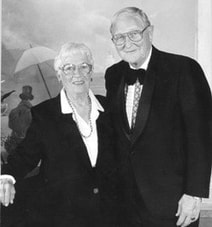 Verle Stucker served with distinction as Dean of Ellsworth Community College from 1957 to February of 1967. At that time he was encouraged and accepted the challenge of assistant superintendent, director of business and director of arts and sciences for the newly-formed Iowa Valley Community College District which included both Ellsworth Community College, Marshalltown Community College and a continuing education component. Continuing education in the Iowa Valley Community College District began under his leadership. He served in this District position for 15 years retiring in 1982.
Verle, a native of Ansley, Nebraska, received his Bachelor’s degree from Nebraska State College in Kearney, Nebraska and his Master’s of Science degree in School Administration from Omaha, University.
He entered the U.S. Navy in 1943 ultimately serving as the gunnery officer of the USS Okanogan, an attack transport. Upon his separation from active duty, he served in the Naval Reserve for 29 years, retiring as a Commander in 1971.
Following his active Naval service, Verle taught for nine years at the high school level and also served as a community school district superintendent for eight years at Benington, Nebraska and Riverton, Iowa.
There were many notable changes at Ellsworth during Verle’s tenure. Among them were two fundraising campaigns of $350,000 and $60,000 and achieving initial North Central Association of Colleges and Schools accreditation. Most significant, however, was his leadership during the growth of the college from 140 students to 1,133 and the start of a number of very successful vocational-technical programs. Verle also provided the support for the return in 1961 of the nationally-recognized Ellsworth Football program. He remained actively involved with the college as a member of the Ellsworth College Foundation Board. He was inducted into the Ellsworth Athletic Hall of Fame on October 14, 2000. He passed away, June 3, 2016.
Marie, a native of Waterloo, Iowa, graduated from the University of Iowa with a degree in Pharmacy. She practiced that profession in Radcliffe and Iowa Falls for many years. She passed away on January 9, 2011.
Verle and Marie often provided financial assistance to the college and also donated a Hammond organ in support of the music program. Verle and Marie’s family include their son, Michael and his wife and three granddaughters.

Apply Now
Donate To This Endowment