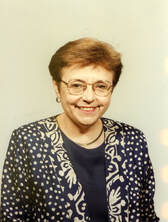 ​Roberta Crawford was born July 26, 1946 in Iowa Falls to Roland and Katura “Kay” Jones Whitesell. She graduated from Hampton High School in 1964 and married Roger Crawford on May 26, 1968. She was a member of the First Congregational United Church of Christ in Hampton. She died November 16, 1999.
The Roberta “Bobbi” Crawford Memorial Endowed Scholarship was created in 1999 by her son, Lee, her mother, Kay, her sister Fran, and their families. Bobbi was an office assistant in admissions and records at Ellsworth Community College for 23 years serving from 1976 to 1999.
Bobbi was responsible for compiling and maintaining the applications of incoming students, their academic records, and preparing and forwarding transcripts to prospective employers and college. She had uncanny skills in knowing current Ellsworth students and those who had graduated and was always the person to whom one turned when trying to recall a particular person.
She was particularly active in Mothers Club, helping with Cub and Boy Scouts, competitive racquetball and for a period of time skydiving.
Bobbi was fun to be around. Most of all, however, she enjoyed her family, her cat Zeus, and in particular her grandson Tyler. Bobbi’s only child was Lee and his wife, Jolie and grandson, Tyler.
This endowed scholarship was funded by gifts from Bobbi’s family, her many friends and Ellsworth staff members with whom she worked.
Apply Now
Donate to this Endowment