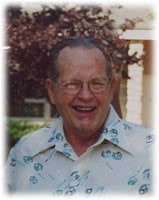 Leon Ernest Ohrlund was born May 3, 1927 to Victor J. and Alma Louise (Rognas) Ohrlund in Des Moines, Iowa. The family later moved to Webster City and then settled in Iowa Falls where Ohrlund graduated from high school in 1945. During that time he was employed at the Rich Rose Service Station. Ohrlund served about two years in the U.S. Navy at the end of World War. Following his service, he attended Ellsworth Junior College in 1948 and then began working in the bookkeeping department of the Hoxie Fruit Company in Iowa Falls.
He married Harriet Westwick on August 18, 1947 and took an office position with the Des Moines Drug Company, where he later became a sales representative and was transferred to Carroll, Iowa. During his time in Carroll, he called on pharmacies and convenience stores in northwest Iowa.
Ohrlund later moved to Storm Lake where he married Marvel Fix on October 29, 1966. He and his wife operated the Culligan Water Treatment plant in Storm Lake and through hard work and dedication expanded the franchise from one to four counties. Leon was a tireless worker, often driving to Omaha for supplies and returning to put in a full day at the plant.
He was a member of VFW and enjoyed traveling. After Marvel’s death in 1999, Leon suffered a mild stroke and battled dementia. He moved to the Newell Good Samaritan Center where he entertained staff with his quick wit until his death, March 30, 2006.
His family includes a son, Bruce Ohrlund, step-son, Rick Fix and step-daughter, Jane Culbertson. He has four grandchildren.
Apply Now
Donate to this Endowment