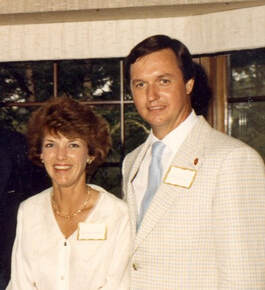 ​Rocky Weaver was born February 18, 1948 to Wood and Elaine Weaver. He graduated from Iowa Falls High School in 1966. He then attended Arizona State University, finalizing his baccalaureate degree in Construction Engineering at Iowa State University in 1973. On June 6, 1970 he was united in marriage to Christie Lynn Burgess in Phoenix, Arizona. Christie was born September 22, 1950 to Rex and Trude Burgess of Mt. Vernon, IL.
Rocky returned to Iowa Falls in 1971 following the death of his father to serve as president and chairman of the board of Weaver Construction Company and its wholly-owned subsidiaries, Weaver Stone Products, Inc., Welp & McCarten, Inc., and P&M Stone Co., Inc. Following the sale of this family-owned business in 1986 to Martin-Marietta Aggregates, Inc., Rocky learned of the closing of the Citizens State Bank and its impending sale. Believing local ownership was in the best interests of the community; Rocky purchased the bank and for a short period of time served as its president, as well as the chairman of the board. Being the president was a much too conservative role for the vibrant Rocky and he set out immediately to hire a new president.
Community service was always a priority to Rocky and he was active in the Iowa Falls Elk’s Club, Rotary Club, Iowa Falls Order of the Moose, Highland Country Club, Iowa Falls Athletic Boosters, Ellsworth “E” Club, Ducks Unlimited, Pheasants Forever, the Iowa Falls Area Development Corporation, Iowa State University Advisory Council on Construction Engineers, and the First United Methodist Church of Iowa Falls. Rocky and his wife, Christie, hosted one of the $1.715 million Ellsworth Community College Second Century Challenge Capital Campaign community meetings in their home and were major contributors to the fund drive for the Ellsworth indoor swimming pool. He also contributed his personal construction skills to provide facilities for the Ellsworth Equine Program.
Rocky lived life to the fullest enjoying all outdoor activities including athletics, fishing, horses, and the hunting of upland game over his bird dogs.
He was nominated twice in 1988 for the Iowa Falls Community Service Award, once by the Iowa Falls Rotary Club and once, along with his wife, Christie, by the Iowa Falls Ministerial Association. Comments accompanying these nominations included: “a remarkable friend of all our people,” “a prime mover for economic development,” “main concerns were sharing what he had with others,” and “their many unheralded acts of kindness and concerns for many individuals and families in our community.” As a joint sponsor of an annual Christmas dinner for senior citizens, Rocky received the “Partners in Aging” award from the State of Iowa.
Rocky was a most gregarious person who simply liked people and whom people trusted. He was extremely generous with his time and with his money. He died on September 12, 1988 at the age of 40 as a result of a tragic accident involving their horse and buggy and a car on July 3, 1988. Christie, regrettably, also died in that accident.
Rocky and Christie are survived by their sons, Christopher Wood Weaver and Rex Robert Weaver; Rocky’s mother, Elaine; sister, Susie Weaver, all of Iowa Falls; a brother, Jim, of Billings, Montana; and the Weavers’ closest friends, Dick and Carol Gauck and family of Iowa Falls. Following Rocky’s death, over 100 of his many friends contributed to this endowed scholarship in his honor. As the year 2000 began, the Times-Citizen newspaper named Rocky, the citizen of the 80s decade and one of the most prominent Iowa Falls Citizens of the 20th Century. His integrity and leadership are sorely missed.
Apply Now
Donate to this Endowment