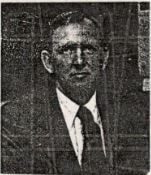 Keith Olson was born June 29, 1931 at LaCrosse, Wisconsin, to Gilbert and Gladys Riensvold Olson. He was a graduate of Mabel High School in Mabel, Minnesota, and Iowa State University. He was married to Ardis Richards at Spring Valley, Minnesota, on July 31, 1954.
He taught school in Rockwell, Iowa, and worked seven years for the Midland Corporation. In September 1966, the family moved to Eldora where he became associated with United Suppliers, Inc. He then became director of International Boar Semen until his death on July 30, 1982.
Keith was a past president of the Eldora Kiwanis Club, a member of the United Methodist Church, serving many local church offices including lay leader and finance chairman. He was president of the Waterloo District Council on Ministries and served on the Conference Research and Development Committee. He served on the Eldora School Board from 1973-76.
Keith was a pioneer in modern swine production and provided leadership as a board member and chair of the Ellsworth Community College Swine Confinement Advisory Committee. In 1984, the program received the Secretary’s Award from the United States Department of Education for being an outstanding vocational education program. Certainly, this award was due in part to the leadership and guidance of Keith Olson.
In 1983, following Keith’s death, Mrs. Olson served as the Ellsworth Community College Homecoming Parade Grand Marshal in recognition of the contribution made by the couple.
This scholarship, for a student enrolled in a program exploring swine production, was established by the Swine Confinement Advisory Committee and reached its goal of $20,000. Awards have been made annually since 1985.