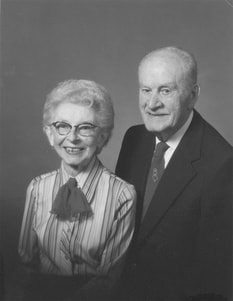 rlene Hartman Kessell was born on January 16, 1907 at Buckeye, Iowa, to Mr. and Mrs. S. J. Hartman and graduated from Iowa Falls High School in 1925. She then enrolled at the Ellsworth Conservatory of Music where she received a music teaching certificate in 1927. While enrolled at the Conservatory, she studied piano, voice and violin under Artemus and Minnie Bullock. She then taught music at Titonka, Iowa, for one year before returning to Ellsworth College to complete the requirements for a bachelor of music degree in 1929. She was a 50-year member and Past President of the American Legion Auxiliary, 50-year member and Past Worthy Matron of the Eastern Star, 50-year member and past noble grand of the Averine Rebekah Lodge, 50-year member of the Thimbles Club and an honorary member of the Etude Club.
Earl Kessell was born June 4, 1897 in Quincy, Illinois. He was the son of John and Ida Kessell. Earl was on active duty with the U.S. Naval Reserve Forces during World War I. Following his military service, he operated a barbershop in the Metropolitan Theatre building for many years. Earl was very active in the American Legion and served as post commander of Hyman-Peavey American Legion Post #188 in Iowa Falls. Earl was also Past Noble Grand of the Independent Order of Odd Fellows Lodge #100 of Iowa Falls.
Earl and Arlene were married on February 23, 1934 in Iowa Falls. Mr. and Mrs. Kessell were both very supportive of Ellsworth Community College believing it to be a very important part of the community. Both were members of the First United Methodist Church in Iowa Falls. Earl passed away on September 27, 1990 at the age of 93.
In 1993, perpetuating her strong interest in music, Arlene established a Charitable Remainder Trust for the benefit of Ellsworth Community College. In 1997, she established an additional trust to provide an ongoing source of funds each year for the purchase of needed supplies, materials and equipment for music and the dramatic arts, in addition to fine arts scholarship support.
At the 1996 Ellsworth Community College commencement ceremony, Ellsworth College Board of Trustee President Jerry Welden and Dr. Paul Tambrino, president of the Iowa Valley Community College District, conferred upon Arlene and posthumously to Earl, honorary Doctor of Pedagogy degrees. Arlene passed away on February 5, 2004 at the age of 97. She is survived by a niece, Joan Ellis of Rockport, Maine; one step-grandson, John Ellis of Washington, Iowa; three great-grandchildren; and one brother, Howard Hartman and wife Clara of Sun City, Arizona.
The members of the Ellsworth College Trustee and Foundation boards and the staff and students of Ellsworth Community College are most appreciative of the perpetual scholarship support of Earl and Arlene Kessell.
Apply Now
Donate to this Endowment