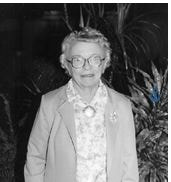 da (Stockdale) Tordoff held a life-long interest in Ellsworth College. She was born on January 17, 1908, at her parents’ farm near Aplington in Butler County, Iowa. Ida was the daughter of Guy and Bessie (Roberts) Stockdale who both graduated from Ellsworth in 1903. She attended the Aplington schools.
Her family moved to Iowa Falls when her father retired in 1920. Because of financial problems, the family moved to a farm west of Iowa Falls in 1923. Since there were no school buses, Ida drove the Model T to high school. Her brother, Elmer, always said that she drove one speed and that was wide-open – foot-to-the-floor. She graduated from Iowa Falls High School in 1925. The financial problems meant the family had no money for her to attend college. Ida said the reason that she was able to attend Ellsworth was the college still owed the Harp Roberts Mill (her mother’s family) money for flour from before it closed in 1920. She attended Ellsworth long enough to enable her to teach country school. She taught rural school for $85 per month the first year, then taught three more years receiving $100 per month.
Her brother, Elmer, and sister-in-law, Gwen (Corson) Stockdale, graduated from Ellsworth in 1935. Elmer and Gwen were supporters of Ellsworth in many ways. Elmer served many years on the Ellsworth College Foundation Board and was its president from June 13, 1983 until retiring from the board on June 14, 1994
Ida married Mervel Tordoff on December 27, 1930. The Tordoff farm was one mile west of the farm her family moved to in 1923. Mervel had left Alden, Iowa, to work as an engineer on the George F. Baker iron ore ship, which opearated in the Great Lakes area. In 1932, the Great Depression hit and the company did not send out ships so Ida and Mervel started farming in the Iowa Falls area. After retirement and Mervel’s death in 1965, Ida worked for the Stockdale Corporation until 1986.
Ida and Mervel had one son, Robert, who graduated from Ellsworth and went on to the University of Iowa to get a degree in Mechanical Engineering. He got a job with the truck division of International Harvester and spent his working life with the company.
Ida passed away August 2, 2003, at the age of 95. She was an 83-year member of the First United Methodist Church of Iowa Falls, as well as a longtime member of the Iowa Falls Women’s Club, the Ladies Social Gathering of Union Cemetery, Maple Grove Willing Workers, and a 50-year member of the Order of Easter Star.
Ida is survived by two nephews, Steven and Jerry Stockdale, and two nieces, Barbara Stockdale and Sue (Stockdale) Bruning. The interest Ida, Elmer, and Gwen held in Ellsworth is being carried on by their family. Steven Stockdale and his son, Daniel have served on the Ellsworth College Foundation Board and Steven’s wife, Virginia, serves on the Ellsworth College Board of Trustees.
Apply Now
Donate To This Endowment