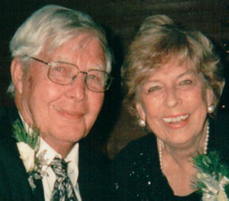 Earle Alan Fitz was born August 20, 1929 at Ellsworth Municipal Hospital in Iowa Falls, Iowa to Earle L and Evelyn (Olson) Fitz. He graduated from Iowa Falls High School in 1948 and Ellsworth College in 1950. He also attended Iowa State College. He enlisted in the United States Air Force in January, 1951 and served as a staff sergeant during the Korean Conflict. He was stationed full-time at Shephens Field in Wichita Falls, Texas as an instructor of jet and reciprocating engines. Following college and his enlistment he married Ida Grace Nissly on June 24, 1951. Following his honorable discharge in September 1954, he owned and operated a 220-acre farm in Franklin County until 1974. In 1963 he founded Riverside Book and Bible in Iowa Falls and operated the business until he sold the company in September 1988. He is a 70-year member of First Congregational United Church of Christ in Iowa Falls and has been a member of the Benevolent Protectorate Order of the Elks (BPOE) lodge in Iowa Falls for 53 years. From 1956-2000, he helped chair the committee organizing the Riverbend Rally water ski show and pulled hundreds of skiers during those years. Prior to suffering a severe stroke, he enjoyed boating, water skiing, flying (he received his private pilot’s license in 1946), traveling for both business and pleasure and mechanical projects.
Ida Grace (Nissly) Fitz was born March 28, 1931 in Des Moines, Iowa to George L. and Hildegarde (Browning) Nissly. She attended the Des Moines Public Schools from 1936-47 until the family moved to Iowa Falls where her father took a position in the firm that later became Nissly and Nissly. She graduated from Iowa Falls High School in 1949 and received her AA degree from Cotley College in Nevada, Missouri in 1951. Following her marriage to Alan in 1951, she helped found Riverside Book and Bible in 1963 and served as the reparation secretary serving in financial management, personnel and other areas until she retired after the company’s sale in 1988. She is a 62-year member of First Congregational UCC in Iowa Falls, has been a member of PEO Sisterhood since 1949, Isabella Literary Club since 1959, the Iowa Falls BPOE (Elks) Lodge, and the Iowa Falls Historical Society. Ida loves the Iowa River in Iowa Falls and skied in four Riverbend Rally Ski Shows starting in 1957. She enjoys boating, reading, decorating, and movies that interest her and are well done.
Allan and Ida were blessed with a daughter, Susan Jean in 1952, a son, George Branley in 1953, and a daughter Sally Jo in 1955. All three graduated from Ellsworth Community College. Alan and Ida are establishing the scholarship in honor of their family and in memory of their son, George, who passed away on November 10, 2014. During his life, George had two kidney transplants, with the first in 1970. ​
Apply Now
Donate to this Endowment