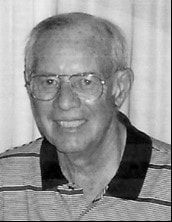 Richard Miller was born February 2, 1928, in Williams, Iowa, to Edward and Mary (Stabler) Miller. He graduated from Williams High School in 1946, Ellsworth Junior College in 1948, and the University of Iowa in 1950 with a Bachelor of Business of Administration degree. Richard married Doris Helvig on July 20, 1950, at St. Mark’s Catholic Church in Iowa Falls.
He was employed by the Citizens State Bank from 1952 to 1986 and served as its president from 1974 to 1986. He then became an agent with Prudential Insurance Company and later joined Principal Financial Group until his retirement in 1999. Richard served as a member and treasurer of the Ellsworth College Board of Trustees for 51 years. His dedicated service was recognized in 1998 when he was presented an honorary Doctorate of Commercial Science at the college’s annual commencement ceremony.
Richard was very active in the community. He was a longtime member and past president of the Iowa Falls Chamber of Commerce and Iowa Falls Lions Club, held a lifetime membership in the Knights of Columbus, and served on the Iowa Falls City Council. He was an avid fan and supporter of the University of Iowa football program, a member of the U of I Gold Hawk Club, and attended most of the Hawkeye home football games for 30 years. He also enjoyed hunting, fishing, farming, spending time with family, playing cards, and travel. He and his wife, Doris, spent part of each winter in Florida.
Richard passed away September 4, 2004, at Ellsworth Municipal Hospital in Iowa Falls. He is survived by his wife, Doris; a daughter, Ann Nolan, and husband, Carl, of Eldridge, Iowa; three sons, John and wife, Elaine, of Des Moines; Jeff and wife, Brenda, of West Des Moines; and Ted and wife, Julie, of West Des Moines; and eight grandchildren. He was preceded in death by his oldest son, Steven.
Apply Now
Donate to this Endowment