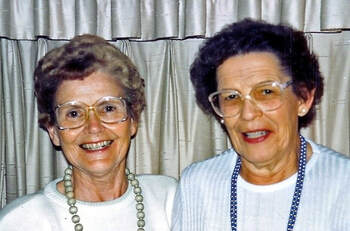 Mary Margaret (Schachterle) Fuller was born March 10, 1916 to William and Lylian (Whiteside) Schachterle at their home in Osceola Township in rural Franklin County. She attended the Ackley Community Schools and graduated from Ackley High School in 1934. She attended Ellsworth Community College and received her commercial business degree from the University of Iowa in 1938. She worked in the president’s office at the university then moved to St. Louis, Missouri in 1943 to work for the Missouri Pacific Railroad and in 1947 moved to Des Moines to work for the Des Moines Steel Company. On February 3, 1959 she married Walter Fuller and in 1961 the couple moved to Albuquerque, New Mexico where she worked for the city and retired in 1978. Walter passed away in 1966. In her retirement she did considerable traveling. Fuller was also a member of the National Secretaries Society, the Covenant Presbyterian Church of Albuquerque and the American Association of University Women. She eventually returned to Iowa Falls where she passed away on July 19, 2004.
Doris (Schachterle) Foster was born May 22, 1991 at Ackley to William and Lylian (Whiteside) Schachterle. She attended grade school in Ackley, graduated from Iowa Falls High School in 1937, and received her BS from Iowa State University in 1942. She taught home economics and science at Blairsburg High School from 1941-43, and home economics at Webster City High School from 1943-45 and Iowa Falls High School from 1953-1976. Foster is a member of the First Congregational United Church of Christ in Iowa Falls and the Retired Teachers organization. She previously served as a volunteer with Hospice of North Iowa. In her spare time she enjoys sewing, gardening, traveling and playing Bridge. She married Ed Foster on June 20, 1942 at a farm south of Iowa Falls. The couple have a son, Edward, Jr. Ed, Sr. past away in October 1985.
Foster endowed this scholarship in honor of her family ties to Ellsworth with the goal of helping young people achieve further education.  ​
Apply Now
Donate to this Endowment