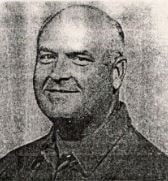 ​Jerry Senters came to Ellsworth in 1983 as Director of Housing and an assistant football coach. He served eight years as the defensive coordinator during an era of very successful teams. He continued as Director of Housing until his passing on September 7, 1998.
He was born in Pikeville, Kentucky. He received his B.A. degree from the University of Iowa and his M.A. from Northeast Missouri State University (now Truman State University). Prior to coming to Ellsworth, he taught and coached in the WACO and North Linn school districts and at Coe College.
Jerry often displayed a rather serious appearance when fulfilling his responsibilities as Director of Housing and assistant coach. Beneath that exterior, however, was an individual who was humorous and simply fun to be around. He cared about people and spent many hours quietly helping people through exercise to overcome or enhance their physical attributes. He was extremely knowledgeable about the coaching of football and track, physical fitness and Civil War history. His family made light of his unique jogging style which they referred to as a “wog” (a cross between a walk and a jog). Track and the Iowa Games were an important part of his life and he served as a volunteer coaching sons Todd and Travis throughout their high school careers and continuing to help Iowa Falls High School track athletes after the graduation of his sons.
Both Karen and Jerry helped at the Iowa Games where Jerry, Todd and Travis competed as well. The 1999 Iowa Games program contained the following in memory of Jerry:

“Jerry Senters epitomized the true spirit of athleticism and volunteerism at the Iowa Games. For years, Jerry and his wife attended the Iowa Games where they volunteered at the track and field venue, helping out wherever they could. Jerry competed in the shot put and discus, usually finishing in the top two or three. His untimely death will no doubt leave a void at the Iowa Games, however, the example he set in the true spirit of volunteerism and sportsmanship will long continue to influence and inspire us.”

In addition to his enthusiasm for athletics, Jerry enjoyed music, both singing and playing his guitar, but with far less skill than his other interests and often to the derisive comments of his audience. Jerry would daily walk across campus wearing simply a short-sleeved shirt, regardless of temperature, even during sub-zero temperatures.
Jerry and his wife, Karen, have two sons, Todd and Travis, who were both outstanding high school football and track athletes. Both continued to play football successfully at the college level respectively at the University of Nebraska at Omaha and the University of Iowa where Travis was elected a captain of the 1999 team. Jerry always claimed to dislike basketball, which Travis played with distinction, but if you looked carefully, he always could be found observing play from some remote part of the bleachers.
Jerry Senters was a very intense, focused person who was sometimes misunderstood, but who cared deeply about people. He is sorely missed. In his memory, the Ellsworth College Board of Trustees initiated an endowed scholarship to perpetuate his memory.
Apply Now
Donate To This Endowment