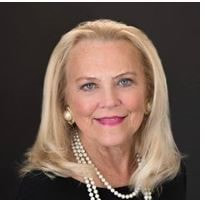 Gloria “Glo” (Lawler) Reber was born April 20, 1949 in Iowa Falls, Iowa to T. Edward  and Lois (Radohl) Lawler. She graduated from Iowa Falls High School in 1967 and earned her BA in International Affairs and Latin American Studies from the University of Colorado in 1971.  She was united in marriage to Richard Reber on November 5, 1977 in Alexandra, VA. Reber worked for the U.S. Senate Veterans Affairs Committee from 1972 to 1974, Golubin & Warwick Realtors from 1975 to 1977, Manarin, Odle & Rector Realtors from 1977 to 1993 and spent six years working for Senator Paul Trible from Virginia from 1983 to 1988, and then became a licensed real estate broker in Virginia dealing in historic properties and new homes. She worked at worked  McEnearnery Commercial Realtors from 1994 to 1998 and Weichert Realtors 1994 to 2004. She was also appointed to serve on the Iowa Commission on Elder Affairs by Governor Culver.
When she retired in 2004, she was ranked in the top one percent of realtors in the nation. Upon her retirement, she and Richard moved to Iowa Falls where she became active in a number of organizations including the Iowa Falls Historical Society, Questors, Iowa Falls Rotary Club.
She has served on a number of commissions and boards such as the Iowa Falls Historic Preservation Commission, the Iowa Falls Chamber/Main Street Board of Directors, Ellsworth College Foundation Board and a member of the PEO in Iowa Falls. In 2013, the Rebers moved to Florida. She has worked at Premier Stheby’s International Realty since 2012.
In her spare time she enjoys horseback riding, traveling, Asolo Repertory Theatre, Lakewood Ranch Business Alliance and the Global Business Council of the Sarasota/Manatee Association of Realtors.  ​