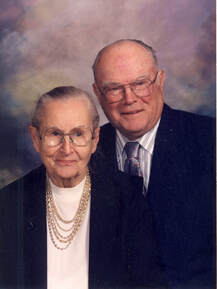 Elmer and Gwen Stockdale were lifetime members and supporters of the Hardin and Franklin county communities and education. If there was a who’s who at Ellsworth, Elmer and Gwen would be most prominent in that group. Elmer graduated from Ellsworth Junior College in 1935, was elected to the Foundation Board in 1959 and became the Foundation President on June 13, 1983. He served in that position until his retirement at the annual meeting of that board on June 14, 1994.
Elmer and Gwen served as the Ellsworth Community College Homecoming Parade grand marshals in 1985. In 1988, the couple, along with their son and daughter-in-law, Steven and Virginia, made a major gift to the very successful $1.715 million Second Century Challenge campaign, which Elmer co-chaired with his longtime friend, the late Foster Mason. Elmer received the first Ellsworth Outstanding Alumnus award in 1989 and in 1997 he was selected to receive an Honorary Doctor of Pedagogy degree from Ellsworth College at its spring commencement ceremony.
The couple farmed in Franklin and Hardin counties for many years and operated Stockdale’s Corporation, a bin and grain-handling business with son, Steven and his wife, Virginia, who continue the family farming operation. A family tradition has been to always plant some corn on Elmer’s birthday on April 6.
Elmer passed away on December 4, 2000 at the age of 85 years and 7 months. A videotape glimpse of the character and quality of life Elmer enjoyed was shown at his funeral service, which helped ease the pain of our personal and community loss. Gwen passed away March 7, 2004 at the age of 88 years and 4 months.
Elmer and Gwen had four children: son, Steven, and his wife, Virginia; son, Jerry, and his wife, Diane; two daughters, Sue Bruning, and her husband, Tim; and Barbara Stockdale; 14 grandchildren and 34 great-grandchildren. Son, Steven and grandson, Dan, both have served as members of the Ellsworth College Foundation Board of Directors and daughter-in-law, Virginia, serves on the Ellsworth College Board of Trustees. Son, Jerry, teaches Sociology at the University of Northern Iowa. Barbara’s son, Matt, played football for the University of Iowa. Matt, who was blessed with success in track as well as football, apparently inherited the speed genes from his grandfather, Elmer, who was very prominent as a dash man in his track career.
Apply Now
Donate to this Endowment