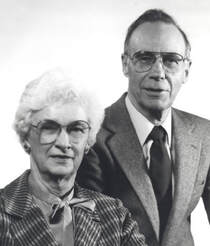 The Hamiltons are one of the most prominent families in the history of Ellsworth Community College and Iowa Falls. From his position as editor and publisher of the Iowa Falls Citizen and the Hardin County Times, Carl guided the fund-raising campaign to build New Main Hall (now Kruse-Main), which raised $357,000 in 1958 and 1959. The building replaced Old Main, which was destroyed by fire ten years earlier. For his efforts, the auditorium in the building was named in his honor. In 1992, Hamilton Auditorium was remodeled and rededicated in Carl’s honor with community members and all of the Hamilton family present.
Carl was born in 1914 in Glidden, Iowa, the son of tenant farmers who insisted on higher education for their two children. He graduated in 1936 from Iowa State College (now ISU) with a baccalaureate degree in agricultural journalism. While a student at ISC, he was editor of the student newspaper, president of the student body and a member of the Cardinal Key Honor Society. Ruth was born in Blair, Nebraska, and received her baccalaureate degree from ISC in Home Economics in 1936 and her master’s degree in 1937. Ruth was selected to the Mortar Board Honor Society. She taught at Texas State Teachers College for Women in Denton, Texas in 1937-38. On August 24, 1938, Carl and Ruth Farnham were married in Ames. They had four children.
In 1938, Carl and Ruth moved to Washington, DC, where Carl joined the U.S. Department of Agriculture as assistant to the Secretary of Agriculture and assistant administrator of the Rural Electrification Administration. The family returned to Iowa in 1948 and purchased a majority interest in the Citizen Printing Company, which published the Iowa Falls Citizen and the Hardin County Times. Carl was named Master Editor-Publisher in 1961 by the Iowa Press Association for his contributions to Iowa journalism. While in Iowa Falls, Ruth served on the library board, was a member of the Isabella Literary Society and was named “Woman of the Year” in 1961 by the Iowa Falls Business and Professional Women.
In 1961, the Hamilton's moved to Ames where Carl was named head of the journalism department at Iowa State University and in 1967 he was appointed Vice President for Information and Development. He served in that position until his retirement in 1984. The ISU journalism building was renamed Carl Hamilton Hall in 1984 in honor of his service to the university.
Over Carl’s career he was involved in his church, the Iowa Falls Chamber of Commerce as president, the Rotary Club, the Governor’s Advisory Committee on Governmental Reorganization, the Iowa Natural Heritage Foundation, and Living History Farms. He also authored two books, “In No Time at All” describing Iowa farm life from 1910-1940 and “Pure Nostalgia: Memories of Early Iowa.” In 1988-89 Carl also served as an advisor in Ellsworth’s very successful fund drive culminating in achieving the goal of $1.715 million.
Ruth’s 43 years in Ames were filled with civic involvement. She was elected to the Ames School Board serving from 1970-79 and was the first woman to serve as its president. She also served on the Story County Soil and Water Conservation Commission and was an active member of the Ames League of Women Voters. Ruth was the recipient of the League’s “Carrie Chapman Catt Award” in 1994.
Carl passed away on June 2, 1991 and Ruth on March 26, 2004. They have3 sons: Mark, Blair and Bruce and daughter, Ann Campbell. An endowed scholarship in Carl’s memory was established in 1991 by the family and the Ellsworth College Trustees. In 2004, the family chose to memorialize Ruth, as well.
The legacy of the Hamilton family continues with Mark’s Times-Citizen editorial leadership playing a major role in supporting a $7.5 million bond issue in 1989. The Iowa Valley Community College District bond issue carried by 87 percent in Iowa Falls and 81 percent in Hardin County. A $100,000 fund drive for the Calkins Nature Area Interpretive Center was completed with Ruth's support in 1996.